Smoke and Rage! On Dog-Warriors, Impetuousness and Smoke Grenades

After Claudius Sol has discussed how to manoeuvre the reckless Aragotos to victory, today we have a look at how Ariadna’s fearsome dog-warriors should fight their battles. As strong as the werewolves may look on paper, the mixture of extreme impetuousness, smoke grenades and super jump requires a bit of practice to unleash the rage to maximum effect.

Many of the items discussed in this article will also apply to other troopers who are impetuous and have smoke grenades. So even if you do not play Ariadna, this article may prove helpful to you.
At first, I will briefly introduce the different breeds of dog-warriors:
Cameronian: The basic Werewolf. All dog-warriors share this profile with some variation, and most have this armament.

Tearlach McMurrough: This mercenary is, background stories aside, an upgraded Cameronian. He is better at close combat, has a better CC weapon and higher armour than the other Cameronians. A subtle addition that may be overlooked is that McMurder, as some of his enemies call him, has Kinematika level 2. Take Tearlach instead of a Cameronian if you can afford it. Unfortunately, McMurrough is only available to the sectorials of Caledonia and Corregidor, not to basic Ariadna.

Duroc: The furry part of the Mirage-5 team is also a pumped up Cameronian. His twist is that he can surprise the enemy coming from the side of the board via airborne infiltration. This shortens his way to the enemy considerably and, most importantly, makes it much more unpredictable. No wonder Duroc is a bit pricey, especially when it comes to SWC. Due to Martial Arts Level 2, he is also a bit better in close combat than the regular Cameronian.

The Kazak Dog-Warrior: Essentially a Cameronian with an extra wound. The transmutation rule means that the dogface is a bit weaker and slower before he gets wounded. You will notice that this extra wound costs you 4 points more than the Cameronian. An amusing danger associated with the dogface is that you have to make sure he is not inside a building when the transformation takes place, as you may not be able to get the dog-warrior with his silhouette of 6 through the door!

Devil Dog: This American breed has the interesting addition of the antipode. The antipode gives the devil dog a +1 Burst in close combat and the very valuable skill of sensor. The marine dog is the only werewolf whose armament is different. The single chain rifle is rather poorly compensated with an AP heavy pistol.
All dog-warriors are relatively cheap considering the damage they can cause. They are also superb for tasks such as saving scientists and retrieving remotes. Multiple werewolves are definitely worth it, they can even rage in unison with combined orders.

An American Werewolf in London

Whatever your choice of breed is, the tactics of werewolf warfare are the same. I will take you through some aspects of it.

Deployment:
All dog warriors are extremely impetuous and have super jump. Therefore it is extremely important to deploy them carefully. And here we get to the first dilemma.
Because dog warriors are highly offensive troopers, they are the most effective when you have the initiative. If you are going first and you deploy your dog warriors in the open (they do not benefit from partial cover anyway), your opponent is likely to place some troopers with long range weapons in an attempt to stop the rage before it hits their lines.
Whether you are going first or second, you may want to put your werewolves behind total cover so that they are not subject to ARO as soon as they move.
However, due to the combination of impetuousness and superjump, they may be forced to jump over the cover, exposing them to a lot of ARO fire and not cover much ground. You absolutely have to avoid that. It is better to lose the impetuous order and pay an order on top than letting the wolf jump into almost certain death.
The ideal place of deployment would thus is a structure which is too high to make jumping the enforced impetuous move and long enough that the dog-warrior can run around it and at the end of this movement, unseen by any enemy, he gets to throw his smoke grenade.
You are very unlikely to find such a spot in every deployment zone, especially if you are fielding more than one dog-warrior. I often field mine on the flanks in order to avoid as much effective ARO fire as possible.
The high cost of Duroc is of little surprise to me considering how much less headache his deployment causes for the owner. Duroc deploys after the opponent, his way towards the enemy should also be much shorter.
A dog-warrior is a good candidate for being held in reserve as the last figure to be deployed. This allows you to calculate the assault path better. If you have to take deployment, try to protect your dog-warriors behind cover and with ARO troopers.

Initial Assault: Dog-warriors can win you games in turn one. However, the approach to enemy lines has to be planned carefully.
Impetuous troopers do not have the ability to not draw ARO fire by not moving them or moving them after this threat has been removed. They move first. This is what the smoke grenades are for. You are likely to have to use the smoke grenade special dodge with the werewolf’s very first move. Fortunately, you are looking at a 19 as the maximum number you can to roll in order to be successful. Make sure your smoke grenade is placed within 8 inches of the model and that it blocks as many LoF as possible. This +3 modifier makes the smoke special dodge better than a normal one.
Of course, it would be so much better to avoid such face to face rolls. Even though dog-warriors are protected with high armour and total immunity, you don’t want to risk exposing them to ARO fire more than necessary.

Now we have to realise that in the impetuous phase we can still choose which impetuous troopers you move first. So you could decide to move a cheaper trooper like a Galwegian first who will try his luck with throwing a smoke grenade while the enemy will shoot at him.
My plan of action usually is the following: I move all my werewolves during the impetuous phase, hopefully not getting anyone wounded relying on making good use of total cover or hoping for good die rolls for the smoke grenades. Dog-Warriors moving later may use the cover of the smoke laid by those before them. The smoke should not only cover their approach, I also have to take care not obstruct my long range fire and I may even be able to support it by denying ARO fire against the long range fighters.
The second step is that my snipers and HMGs will open fire on the enemy that are likely to shoot at the werewolves in their assault. Enemy with multispectral visors are a primary target as they nullify the smoke cover.
After that has been done, I move my wolves. I may even want to use coordinated moves to minimise order usage and ARO. Now I can smoke as much as I need to, because the Caterans and Mormaers have already done their part. Unfortunately, it is difficult to throw a smoke grenade from inside the smoke. That costs a full order, but again, due to the high PH value the werewolves are likely to pull off that stunt.
In ITS missions, you have to be careful that your werewolves are not too successful in your first turn. If your opponent starts his turn already in retreat, you may not have the opportunity to claim objectives anymore because the game will end. 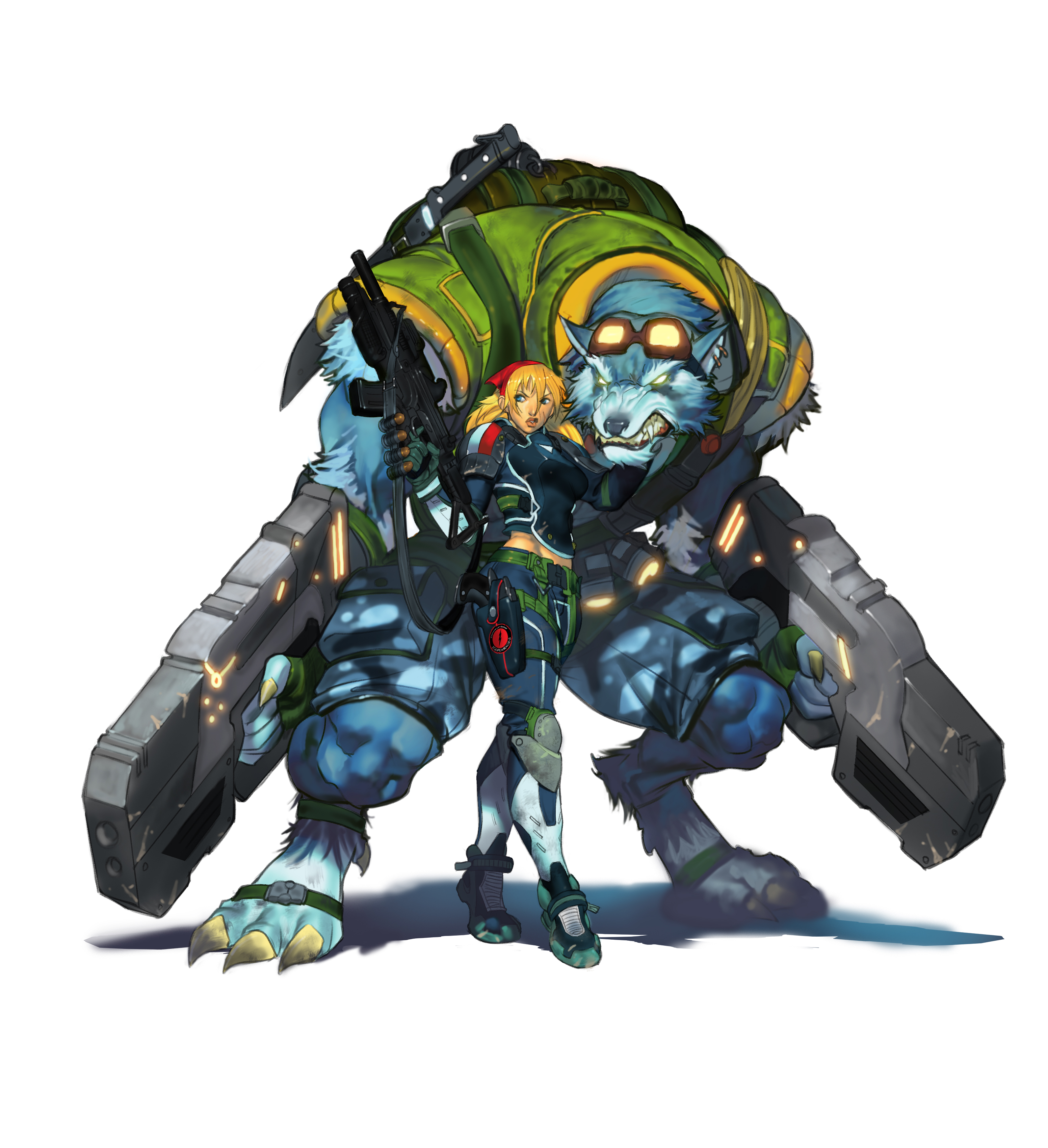 Super jump allows to move faster when the troopers have to go up or down buildings or from one rooftop to the next. It also allows the werewolves to get past littered spaces where their huge bases would otherwise not allow them to pass. While this is all great, I try to avoid the super jump as much as possible in order not to draw ARO fire. A big guy high up in the air is a great target for many to see, and Infinity does not have modifiers for the speed of the target. So it is better to cover the table in smoke templates before the doggies jump around.

The Weaponry: All dog-warriors (apart from the devil dog with boarding shotgun) are equipped with chain rifles, grenades and armour piercing close combat weapons.
The chain rifles combined with the high speed play a major part. You may even go as far as to consider the dog warriors long range fighters for this reason. I do not really agree with this notion as it is certainly harder and riskier to effectively manoeuvre a Cameronian than a tank hunter. Two chain rifles means that you can spread out the pain over many models at once, making a possible ultimate sacrifice of the dog warrior worthwhile. Covering enemy troopers with both templates will make the opponent consider it twice whether dodging is not the better option. The dog-warrior may even survive, total immunity is a very useful trait.
Don t forget the ordinary grenades, they are also a great ARO weapon in the strong arms of a dog-warrior. This is why I am not such a big fan of the Devil Dog weapons. The grenades all werewolves have already cover that issue.

Most importantly, the high PH of the werewolves makes speculative attacks with the grenades a very viable option.
Dog-warriors can be described as close combat specialists. They are fast to get into base contact and with their high PH, they can hit as hard as a machine gun. My preferred way of attack is to walk into the smoke unseen and then run into cc from there, drawing less ARO. In infinity, you do not need to see an enemy in order to charge him/her. You don’t even need to see them when you are hitting them, so you may even throw the smoke grenade on the enemy trooper and then attack. Unless you are using a devil dog team, close combat is always a gamble because both players roll a single die.